There was a lot of expectation about the fight between the rivals Jon Jones and Chael Sonnen at UFC 159, but it wasn’t close; in fact, Jones might have sent Sonnen to retirement after knocking him out in the first round. 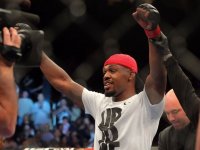 “I’m going to think it through,” Sonnen said about the retirement possibility. “I’m not going to be one of the guys who hangs around if he doesn’t have a road to the title. I believe that was my last opportunity.”

Jones took wrestling seriously against Sonnen surprising most of the MMA fans, and he dominated the entire contest without many problems. “I was just glad to beat Chael Sonnen,” said Jones (18-1). “He’s an awesome opponent. We went through a lot of drama and he motivated me a lot.”

“I celebrated my two-year anniversary of being a champion this year, and Anderson has been doing it for about six. That’s phenomenal! That’s phenomenal pressure that he’s been able to uphold and continue moving forward with. I admire him so much. I’ve had some great fights, and I’ve had a great career, but Anderson is an amazing guy. He’s still my idol”, said Jones.

With UFC 159 in the past, the Big Fight for UFC 160 will be Mark Hunt vs Junior Dos Santos, on May 25th at the MGM Grand Garden Arena at Las Vegas, Nevada. Dos Santos is the favorite at -350 while Hunt pays +250 as a dog winner.