The UFC hasn’t held an event in Las Vegas with a crowd since March 7. 2020. That run ends on July 10 when the promotion heads back to T-Mobile Arena for UFC 264. The main event of that pay-per-view card is the third meeting between former UFC interim lightweight champion Dustin Poirier and ex-two division UFC kingpin Conor McGregor.

The first fight between these two took place in September 2014, when both men were competing at featherweight. McGregor won that scrap with a quick first-round knockout. After the loss, Poirier said he allowed McGregor’s pre-fight antics to get in his head.

A more mature Poirier didn’t have that problem in the second meeting. Poirier has gone 9-2-1 since he lost to McGregor. McGregor was 6-2. Poirier outclassed McGregor in the second contest. He had progressed far more as a fighter than McGregor had since their first matchup. Poirier disposed of McGregor at the middle of the second round via knockout.

I think the first two fights were excellent indications where each fighter was in their career at the time the bouts took place. At the time of the first meeting, McGregor was a juggernaut. He was confident and brash and had won 11 fights in a row. He was on the fast track to capturing two UFC titles. Poirier was a good, but not great fighter. Despite his experience, he had not yet developed into the fighter he is in 2021.

By the time the second meeting rolled around, Poirier was a focused gym rat. He was confident he could beat any opponent, and he worked tirelessly to get better and close whatever gaps there were between him and the rest of the lightweight division. He was a well-rounded competitor who had changed with the times. McGregor was confident as well in the second fight, but he had aged and not developed. He believed his power and style would carry him through a rematch with Poirier. It didn’t. Poirier took McGregor’s best shots and used calf kicks to hobble him. McGregor had no answer for Poirier in the second fight.

Poirier was back in the gym shortly after he beat McGregor. McGregor took a long time off before getting back to training. McGregor is saying the right things in the lead up to the trilogy fight, but Poirier is doing the right things and that’s why I believe Poirier will win this contest.

I believe McGregor will be better prepared for this fight, but I also think Poirier will have some new tricks in his bag. I expect McGregor will over correct for the calf kicks ahead of this contest and that will leave him open for different attacks from Poirier. There is a strong chance Poirier will land those kicks again, as McGregor is heavy on his front leg, but I think Poirier might also employ more wrestling since that has been a weak spot of McGregor’s.

In the big picture, Poirier has more ways to win this fight, and I think his confidence will be soaring ahead of the contest because he knows for a fact he can get rid of McGregor. The odds are okay, but not great for Poirier. So a prop bet for over/under on rounds might be a good pick. I think this one goes longer than the first two fights and possibly the distance. I’m picking Poirier to win by decision, but I could also see a knockout or submission from Poirier. If McGregor wins this bout, it will likely be via early knockout while his power and cardio is at its highest and that will be before the start of the third stanza.

Poirier is at the height of his game, McGregor has dropped off. The fact that McGregor was unprepared for the calf kick — the most popular leg strike in MMA today — shows me that his team has fallen behind other MMA gyms. Poirier’s head coach, Mike Brown, has not fallen behind. In fact, Brown has become one of the most respected minds in MMA. The only place Poirier is not better than McGregor these days is in the power department, and even then, Poirier took everything McGregor threw his way in the second meeting between these two.

With Michael Chandler and Charles Oliveira fighting for the vacant UFC lightweight title at UFC 262, it looks as if the winner of this contest will move on to face the newly crowned lightweight titleholder. 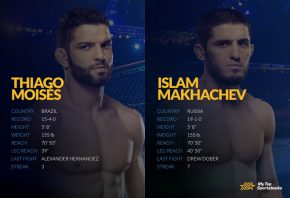