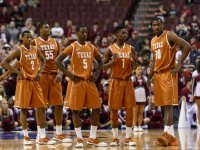 Texas has won two in a row and nine of their last 10 games for a 20-5 overall record; they are also 9-3 against Big 12 rivals, including the 88-71 victory over the West Virginia Mountaineers last Saturday.

“We’re all playing for each other,” Texas Cameron Ridley said after scoring 17 points in the victory. “We’re playing for a Big 12 championship. Everybody on the team has the same goal, which is to win games, not anything selfish.”

Iowa State is 19-5 in the season; they have won four of the last five matchups, including a 70-54 win over Texas Tech, also on Saturday.

“We just lost our minds for a stretch,” Iowa State coach Fred Hoiberg said. “For us to find a way to get it, even after they took the lead, is huge for us. I saw some faces in that huddle when they were making that run that suggested a little bit of bad body language,” Hoiberg added. “We pulled it together. Georges made some big plays for us down the stretch. Matt (Thomas) made a big basket…and DeAndre made a lot of big plays for us.”