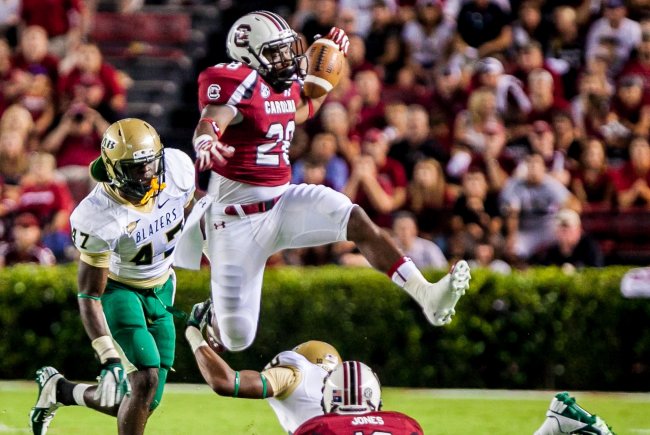 South Carolina lost several of its best players, including defensive end Jadeveon Clowney, the number one overall pick in the NFL Draft.  However, Spurrier and his staff put together a string of strong recruiting classes, building talent and depth at every position.

The Gamecocks return the most talent and experience at offensive line.  Four starters are back, including guard A.J. Cann and tackle Corey Robinson, both preseason second-team All-SEC selections.  Junior guard Brandon Shell also returns along the line.

They’ll be blocking for one of the top running backs in the country this season.  As a sophomore, Mike Davis had 1,183 rushing yards and 11 touchdowns, along with another 352 yards receiving.  Davis is the Gamecocks’ game-breaker, and his continued production is imperative for the team’s success.

Senior Dylan Thompson will finally get his opportunity at quarterback, replacing the celebrated Connor Shaw.  Thompson will work with receivers Shaq Roland, Damiere Byrd, Pharoh Cooper and Nick Jones.  Roland is the most talented of the group.

On defense, the Gamecocks’ greatest strength will be at linebacker, where two of the team’s top three leading tacklers from last season are back.  After leading the team in tackles as a freshman, sophomore Skai Moore might be the best defender on the unit.  He will be joined by junior linebacker Kaiwan Lewis in Spurrier’s 4-2-5 defense.

South Carolina’s secondary will constitute a mixture of returning experience at safety and inexperienced uncertainty at cornerback.  Safeties Brison Williams and Chaz Elder hope to keep things steady as the corners gain experience and confidence.

Aside from cornerback, the team’s biggest question is at defensive line.  After losing defensive ends Clowney and Chaz Sutton, along with All-American defensive tackle Kelcy Quarles, tackle J.T. Surratt is the lone remaining starter along the defensive line.

South Carolina begins its season against Texas A&M at home and will face Georgia two weeks later.  Its biggest road tests will come later in the season at Auburn, Florida and a season-finale at Clemson.

The Gamecocks currently stand at 33-1 to win the National Championship and are at 13-2 to win the SEC.