The Dallas Cowboys’ AT&T Stadium will host an important SEC West showdown this Saturday, as the undefeated sixth-ranked Texas A&M Aggies will face off against the Arkansas Razorbacks (3:30 p.m. Eastern on CBS). 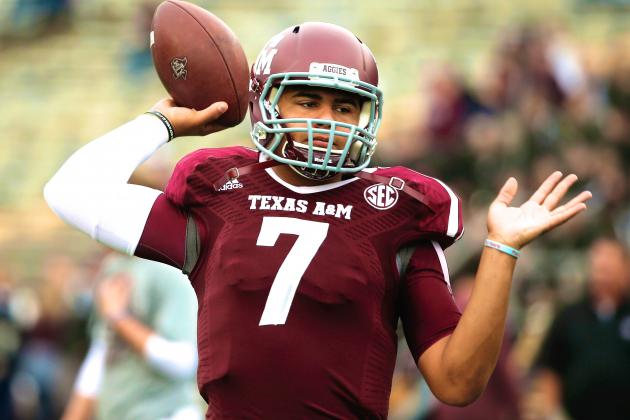 The Dallas Cowboys’ AT&T Stadium will host an important SEC West showdown this Saturday, as the undefeated sixth-ranked Texas A&M Aggies will face off against the Arkansas Razorbacks (3:30 p.m. Eastern on CBS).

The story of Texas A&M’s season thus far has been sophomore quarterback Kenny Hill’s play.  The young signal-caller has already thrown for 1,359 yards and 13 touchdowns against just one interception in four games.  But perhaps what’s been most impressive is Hill’s performance in his first career start, when he helped the Aggies blow out the then top-10 South Carolina Gamecocks on the road.

“We’re just going to keep playing the way we have been and prove to everybody that we can play,” said Hill after the team’s win over SMU last Saturday.

Hill has been instrumental to the Aggies’ success, but the biggest factor may be the team’s vastly improved defense.  Texas A&M is allowing just under 12 points on average through the first four games.

However, the Aggies will face a big test this weekend, as Arkansas is a much-improved team since last season.  The 3-1 Razorbacks already have a big win over Texas Tech on the road.

The Razorbacks have a chance to make a huge statement on Saturday, especially with their high-octane offense, which is dangerous both through the air and on the ground.

“We’ve made progress; we’ve done certain things better,” Arkansas head coach Bret Bielema said.  “I think, without a doubt, our guys have a lot more confidence than they maybe had a year ago.  But until you’ve done it on a big stage and against a quality opponent like we’re going to see Saturday, it’s really just talk.”