The best game of the first week of 2013 college football puts the Georgia Bulldogs going head to head against the Clemson Tigers, this Saturday at 8 PM ET at Memorial Stadium. 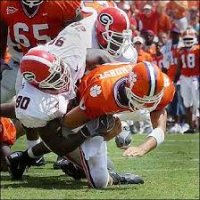 The Bulldogs could have represented the SEC in the 2012 BCS championship game but failed by one play.  They will have quarterback Aaron Murray back one more season, but their defense lost plenty of talent for this campaign.

That loss against Alabama in the SEC championship gave hope to Georgia, who believes are just one step away from becoming a great football program.

“It taught us that we’re right there as a team,” Murray said. “I think we’re a lot more confident that we can compete in those big-time games. We’ve got to keep working and keep staying hungry.

“I think Georgia’s back where in needs to be in terms of national respect. Now we’ve just got to push the door open.”

Three of the first four matchups this season are against top-15 teams for the Bulldogs; those matchups will reveal everything you need to know about Georgia. “We’re trying to be in mid-season form by Game 1. A lot of things have to be done to get us ready for that gauntlet. We know it’s coming. We’ll be ready,” coach Mark Richt said.

Clemson is excited Martin Jenkins; Darius Robinson and Bashaud Breeland are back to help their secondary after different injuries in 2012.

“Everybody knows that’s the area of our team that’s got to improve the most,” coach Dabo Swinney said.

The Bulldogs are 2 point favorites for the game on Saturday.  The game total is set at 71.