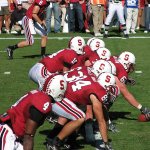 Unless there tumult at the top of the rankings, it’s safe to say that the UCLA Bruins (8-2, 5-2 Pac-12) won’t be in the College Football Playoff, but the Bruins still have a shot at the Pac-12 title and need to finish the season strong to reach that goal.  The Bruins will finish the regular season with two straight home games.  This weekend, they face a tough USC squad.  Then, in week 14, the Stanford Cardinal (5-5, 3-4 Pac-12) come to town.  The Bruins and Cardinal clash at the Rose Bowl on Friday, November 28 (3:30 p.m. Eastern).

After consecutive losses to Utah and Oregon in October, the Bruins have won four in a row against conference foes, including three on the road.  The strength of the Jim Mora Jr’s Bruins is the offense; led by QB Brett Hundley, UCLA has the 32nd best offense in the nation, scoring 34.7 points per game.  At times this season, the Bruins have struggled to keep points off the board, though.  They sit 79th in points against, allowing 27.9 per game.

Stanford got off to an encouraging 3-1 start to the year, but, after dropping three of its last four, are now 5-5 on the season.  The defense has been solid all season, giving up just 16.5 points per game (seventh in the country), but the offense has not lived up to its end of the bargain. The Cardinal are 99th in the nation in points per game with 23.9.  The offense reached a new low last weekend in a home loss to Utah, mustering just seven points in the first 60 minutes.  The defense was once again staunch and held the Utes to just seven points of their own, but then gave up two touchdowns in OT to lose 20-13.

If Stanford drops its week 13 game against Cal, they will need a win against UCLA in order to finish the season at .500 and earn a spot in a bowl game.

Though Stanford is having an off-year, it has a great track record against UCLA recently.  The Cardinal have won six in a row in the series against the Bruins, and haven’t lost since 2008. Stanford has also covered the spread in five of the last six.