A staple of any Olympic Games is wrestling. The events have been a part of every competition aside from 1900. In 2020, there are 18 different events with 288 wrestlers — both men and women — chasing a medal. This article will encapsulate our favorite wrestling betting picks to make from now until the events draw a close on August 7. There’s a lot of “ground” to cover, so let’s get right into our betting advice:

The top betting sites have up-to-the-minute betting lines on every single wrestling competition. However, one of the most tantalizing odds is featured in this weight class. As it stands, here are the betting front-runners to win gold:

In betting, not every bet you make has to come with an unshakeable conviction that the pick is going to come true. Thinking this way is a newbie mistake. You see, there come certain times when you simply bet one direction because it offers more value (e.g. an option is severely underpriced) than it should be. This is one of those cases.

Japan’s own Takuto Otoguro is a pretty sizable underdog at +500. However, we wouldn’t be shocked if Otoguro pulls off an upset in this weight class. And if he does, he could provide seismic returns given the steep betting lines. So in essence, Otoguro is a low-risk, high reward wager and one we absolutely love.

Where do we start with Otoguro? His world championship in 2008? Or how about his multiple gold medals at the past two Asian Championships? Or maybe his “home court” advantage?

All three of those are true, even the latter one. With 17 gold medals currently, Japan has already set a personal best, breaking the previous mark it set in 1964 (16 gold medals) — the only other time it hosted the Olympics. That same home advantage coupled with Otoguro’s history of success makes this an upset-worthy betting pick.

The largest weight class in freestyle wrestling promises to be one of the most closely contested battles for gold. The top-three betting favorites are almost neck and neck per bookies.

Petriashvili and Akgul are the fiercest of rivals. The two favorites have dominated the heavyweight scene for the better part of seven years now. Petriashvili has three world championships to his name from 2017, 2018, and 2019. However, Akgul is the reigning Olympic champion, having won the weight class in the 2016 Games in Rio. The two met recently at the 2021 European Championships, a battle won by Akgul.

Steveson is the newcomer of the group, debuting in his first-ever Olympics but comes with quite a checkered past for a 21-year-old. He’s fresh off winning the NCAA heavyweight title at Minnesota and hasn’t lost since August 2019.

It’s a close call but Akgul takes our money here. Ultimately what sealed the deal was Akgul’s career record of 6-2 against Petriashvili. It’s obvious the Turkish has his number and if he crossed paths with Steveson, the experience will be a difference-maker favoring the 30-year-old Akgul.

We don’t like making it easy on ourselves hence why our final betting pick is another virtual toss-up, according to the bookmakers:

There’s hot, then there’s Phogat hot. The Indian wrestler is the No. 1 seed of her weight division and has looked almost unbeatable as of late. She won the Matteo Pellicone for the second straight time, but not only that, she didn’t concede a single point during the competition. Not one point! That was followed by another straight-up victory at the Poland Open.

Benefitting Phogat is that American Helen Maroulis will not compete at 53kg. She won the gold five years ago at the Olympics — the first-ever American to do so in wrestling — but has moved up to 57kg this time around. That leaves the door wide open for Phogat to take home the gold.

How To Watch & Bet On Wrestling At The 2020 Olympics

Wrestling will flood the Olympic schedule from now until August 7. Every single day will feature at least one gold medal match on top of other qualifying bouts. Listing the full schedule would be a separate article in itself so we’ll spare you the time.

However, for those that want to watch along, you’ll be able to catch tape-delayed broadcats on the Olympic channels. For traditional TV watchers, that includes NBC, NBC Sports Network, and the USA Network. Streamers can rely on NBC’s app, Peacock, for broadcasts. Due to the time zone differences between the United States and Japan, Olympic events air on these massive delays — so you’ll likely know who won by the time you’re watching.

Therefore, you want to lock in your wrestling bets early on rather than risk sleeping through the mat battles. To do just that, head to one of the online sportsbooks featured in the underneath table. For Olympic betting, it’s hard to go wrong with these betting sites.

While you’re wagering away, be sure to take advantage of promotional bonuses offered by the sportsbooks too. Current promos are listed in the below table. As you can tell, there’s a chance to earn up to a thousand dollars in free play from these bonuses. To get started, click that “bet now” button! 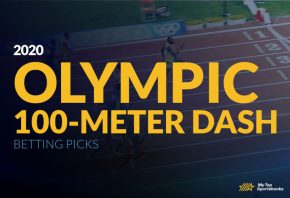