How To Bet NASCAR Sonoma Race

Once a year, NASCAR pays a visit to California’s “wine country” nestled in Sonoma. The race here, contested on a road track, has yearly been one of the most unique competitions in the entire NASCAR rotation. For some bettors, that course uniqueness is good. For others, it’s anything but. No matter what camp you fall into as a bettor, this guide should help out next time you’re wagering on the Sonoma race. Here’s everything you need to know before putting down a single dollar.

Those searching for NASCAR Sonoma odds at rock-solid prices need to explore the betting sites below. These bookmakers don’t short-change their bettors when it comes to betting on NASCAR. Even more, the online sportsbooks feature big-money promotions, easy-to-reach customer service, and are trusted by thousands of bettors around the world.

Below you’ll find the latest NASCAR Sonoma odds 2021. The racing field features well over 40 drivers, however, the ones listed below currently have the best chances at winning, per bookmakers.

Popular Types Of NASCAR Bets You Can Place On Sonoma Raceway

The table above isn’t the only NASCAR odds at Sonoma available to bet on. Nope, there’s plenty more. Let’s cover those and explain the differences between each next.

By far the most commonly bet-on NASCAR wager is the race winner. Its name gives away the purpose of this wager — pick the first-place finisher. That’s it. Whether it’s Sonoma or another track, race winners usually have long odds no matter the driver you choose. That’s just the nature of picking a winner in a crowded field of competitors. The silver lining, however, is those steep odds become huge paydays if the wager does indeed hit. High-risk, high-reward as they say.

Matchups are more modest than race winner in every way. For one, the betting field goes from everyone racing down to either four drivers (this is a group matchup bet) or two (head-to-head matchup bet). Second, bettors are picking only which drivers in the matchup perform better against one another, not who wins the whole race. Three, the betting lines come back down to earth. More times than not, matchup favorites will have a line in the minus range, which would be unheard of in a race-winner bet.

Props completely flip the script. That’s because these bets can be on a host of activities — which driver runs the fastest lap, over/under on the number of lead changes, over/under on pit stops, and so on. Side bets such as these add excitement to the entire race rather than just the final few laps that determine outcomes in driver matchup and race-winner bets.

Futures take a more forward approach than just what happens at the Sonoma race. Which driver wins the Cup Series championship is a prime example of this. A future bet like that is bettable almost year-round. Wagering lines for it will fluctuate as the season trickles down based on point standings, injuries, etc. 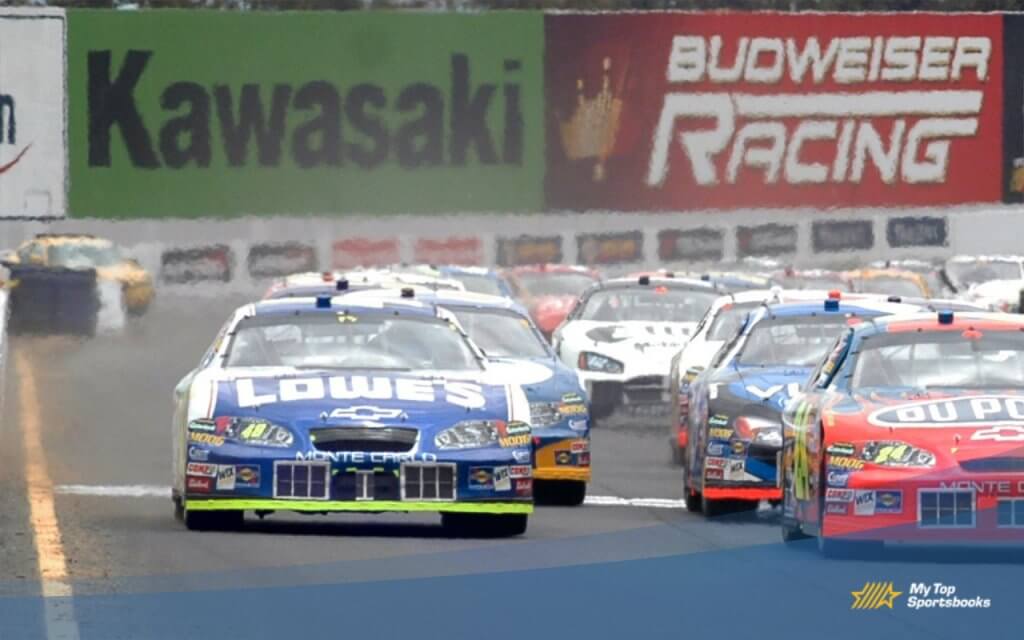 Once upon a time, road races were rare in the NASCAR Cup Series. That’s beginning to change, however. In 2021, NASCAR added three more road competitions (for a total of six) to the NASCAR Cup Series — doubling from the year before. But make no mistake about it, the Sonoma Raceway is one of the “O.G.” NASCAR road tracks (along with Watkins Glen International).

The track first debuted in 1968 but wasn’t added into the NASCAR rotation until 1989. Since then, it’s been home to the  Toyota/Save Mart 350 annually — which is the only NASCAR Cup Series event held in the United States’ most populous state, California. The race itself consists of 90 laps on a 2.52-mile, 12 turn road course. It takes place every June, a perfect kickstart to the summer NASCAR schedule.

Road courses are a sharp departure from the usual, perfectly-oval tracks deployed in other Cup Series events. Racing on regular roads throws a fresh set of challenges at drivers — lots and lots of shifting, hard-braking turns, high-speed corners, and tricky hairpins. The Sonoma Raceway, in particular, is notorious for its high-speed bends and a hairpin turn. These added difficulties are actually what gives Sonoma its biggest charm.

The wine country gets its NASCAR action on Sunday, June 6 at 3 pm EST. It’s the final tune-up before the exhibition All-Star event.

How can I watch the Sonoma race?

Fox Sports 1 will be the exclusive home of the Toyota/Save Mart 350. It’ll simultaneously broadcast it on its TV channel and streaming app, Fox Sports Go.

Who has won most at the Sonoma raceway?

That would be Jeff Gordon, who is a five-time winner of the event. He famously won it three straight times between 1998-2000. Among active drivers, Martin Truex Jr. has three victories — which ties him for second-most all-time with Tony Stewart.

What betting tips do I need to know?

At Sonoma, familiarity breeds success — perhaps more so than any other track. The event is notorious for having multiple-time winners. For picking a race winner or matchup bet, perhaps lean on drivers who have shown the challenges of the Sonoma Raceway is no match for their racing prowess.

Why did NASCAR add so many new road races to the Cup Series rotation?

More than anything else, NASCAR is looking to energize its product. The sport has shed popularity over the years, which means it needs to try new things. Plus, road courses keep the sport honest to its roots. During the moonshine era, drivers had to dodge police cars on regular roads — not giant ovals like many current-day NASCAR tracks.