How To Bet On Watkins Glen Race

NASCAR isn’t short on iconic races, but even then, “The Glen” — as this race is affectionately called — is high on the list. That’s because the track is among the most unique in the entire NASCAR rotation. Therefore, we felt obliged to create a betting guide for all things Watkins Glen International. How to wager on it, NASCAR odds at Watkins Glen, tips to win, everything you need to know, we have it for you right here! So buckle up!

Any journey that involves betting on NASCAR starts and ends with an online betting site. But you see, you don’t want to join just any bookmaker. No, you should target the top-tier ones with the best Las Vegas odds NASCAR Watkins Glen, promotional offers, and just overall, good customer experience. The list of sportsbooks highlighted below to check each one of those boxes and then some.

For planning your bets, you absolutely need to know what the current NASCAR odds to win Watkins Glen are. We’ve included them below for your convenience. It’s also important to remember NASCAR odds Watkins Glen are constantly in motion. Bookmakers are always reacting to current events such as a driver gaining momentum or the opposite, trending downward, all of which influence the betting prices.

Popular Types Of NASCAR Bets You Can Place On Watkins Glen

There are bets galore at The Glen, each one being different from the other. Here are prime examples of the NASCAR betting odds Watkins Glen that you’re likely to come across whilst wagering:

The simplest of all NASCAR bets is the race winner. Pick the exact driver that crosses the checkered flag first at The Glen and you win. But not just win, you win big time. Given there are more than 40 drivers in the event, each one will have long odds (plus money) to win straight up, even the “favorite.” Therefore, potential payoffs are massive in the race winner.

Admittedly, matchups aren’t nearly as lucrative as race winners. But at the same time, it’s much easier to win this bet. That’s because the betting field is cut down dramatically. Matchups come in two sizes — either head-to-head (two drivers only) or group (four). As a bettor, you’re simply choosing who in the group places highest by race end, not necessarily who wins it all.

NASCAR props can range on a host of different outcomes related to The Glen. Some of the most popular props include which driver runs the quickest lap all-event long or over/under on the number of lead changes atop the race. Notice how the aforementioned props have little to do with who wins or who places where? That trait is what sets props apart so much from matchup and race-winner wagers, which are more cut and dry.

Then there are futures bets, which actually have little to do with The Glen. This is because futures, as the name hints, concern themselves with distant outcomes like which driver will win the entire NASCAR Cup Series. That futures wager is immensely popular and can be bet on at any point in the racing season — before Daytona, after The Glen, and heck, even right before the final four championship race. 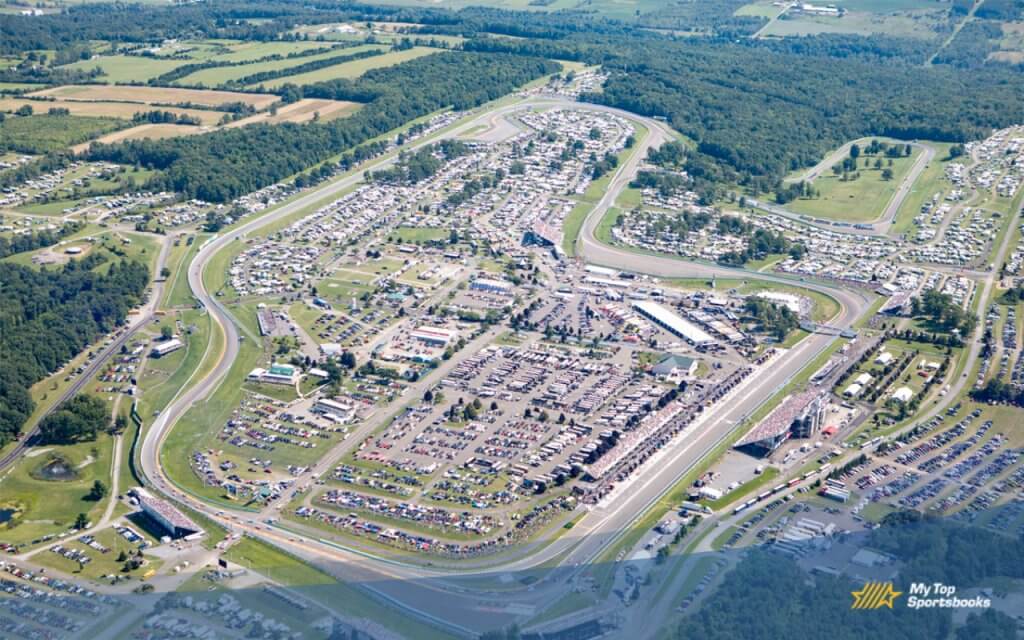 “The Glen” — that nickname is synonymous with motorsports racing, both in the Formula 1 and NASCAR sense. It’s a special road course, and perhaps the most popular one in all of North America at that. For the longest time, Watkins Glen was one of only two road races on the NASCAR Cup Series rotation (Sonoma being the other), however, that’s changed in recent years as NASCAR has implemented more road tracks. Regardless, Watkins Glen remains the originator and the all-time classic.

As you’d expect with any road course, the sharp and unexpected turns make it what it is. For NASCAR drivers at Watkins Glen, there are seven of those — each more distinctive than the last. There’s the dramatic uphill “esses”, the carousel, and most famous of all, “the boot.” The twist and turns go for a full 2.45 miles long.

Once a year, NASCAR’s best descend onto the track, which is located in Upstate New York. The town itself, also called Watkins Glen, is nestled in between the rolling hills of the beautiful Finger Lakes. The tip-top, natural scenery provides the perfect backdrop against NASCAR’s rough-and-tumble ways.

The first-ever Cup Series event at Watkins Glen happened in 1957, before becoming a regular occurrence from 1986 and onward. Today, the race is dubbed Go Bowling At The Glen and is penciled in toward the end of the season, right on the verge of the playoffs. It’s become one of the most-looked-forward-to races among NASCAR fans and bettors alike.

When is the Watkins Glen NASCAR race in 2021?

Go Bowling At The Glen is taking place on Sunday, August 8. The green flag for the race goes down at 3 pm EST sharp.

How can I watch the Watkins Glen race?

NBC will have exclusive rights to The Glen broadcast. It can be watched live on its NBC Sports Network channel on TV or its streaming app, Peacock.

Is Watkins Glen a fast track for NASCAR?

Relative to road courses, yes, Watkins Glen is actually quite fast. Of course, it’s nowhere near the level of a regular speedway (e.g. Daytona or Atlanta), but it’s not a slow burn by any means either. Watkins Glen features three long straights, which provide ample opportunity for drivers to kick into high gear.

Which current drivers have had the most success at Watkins Glen?

Among active drivers, only Chase Elliott and Kyle Busch have taken first place at The Glen on more than one occasion. Both have two wins apiece, which puts them fourth-place all-time at the course. They have a long ways to go to catch to Watkins Glen wins leader Tony Stewart at five.

What betting tips are there for Watkins Glen race?

We feel like saying “expect the unexpected” is a cliche in regards to any NASCAR event, but the advice just carries extra weight at Watkin Glen. As we’ve mentioned before, this road race really is in its own lane. Success here comes down to course experience and honestly, sheer luck at times. Knowing that, you probably want to explore the prop wager market and also not go “all in” on any single driver. Diversify your bets at Watkins Glen.