Two undefeated teams clash this Sunday afternoon as the Philadelphia Eagles take on the Arizona Cardinals this Sunday at U of Phoenix Stadium at 4:05 PM ET. 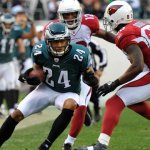 The Eagles had a nice win against the Baltimore Ravens, showing they could be dangerous if they are focus and avoid making crucial mistakes.

The Eagles offense is fast and explosive, but they have made nine turnovers in two games this season; if they can drop that number, things will get easier.

On defense, Philadelphia’s job is to get pressure on ex Eagles quarterback Kevin Kolb; now with the Cards. “We have to put pressure on (Kolb),” Eagles defensive end Brandon Graham said. “That’s what we saw happen to him here. When you put pressure on him, he’s a different guy. But if you let him sit back there, he can pick you apart a little bit”.

“The biggest thing I took is when it’s high there, when things are going good, you can’t buy into it because there is a lot of hype,” Kolb responded. “Everybody is patting you on the back, and when it’s low, good gosh, is the sun going to come up tomorrow? Although it’s not quite like that here, it is the NFL, and that’s the way it is nowadays. As a quarterback especially you have to be able to ride those waves and stay level-headed with every experience”.

The Eagles are four point favorites over the Cards despite the game is in Arizona.