I bet the Green Bay Packers never thought their undefeated season would go down the drain
in Kansas City; that´s why they can’t allow themselves to have another off day when the
Chicago Bears visit Lambeau Field on Christmas night.

The NFL lines have the Packers favorites by 13 points. 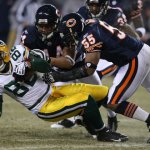 The lost against the Chiefs was a bad one for the Packers for two reasons; first, they lost the
opportunity to have a season for the ages, and second, they got exposed in many portions of
the match.

The game plan against Aaron Rodgers was pretty simple. The Chiefs pressured Rodgers and
exposed the offensive line; then they covered all his receivers really well, and he never found
anything.

However, the key was on offense as they run the ball often, and with smash hard-hitting
football with Jackie Battle and Thomas Jones (keeping Aaron away from the field), but also
quarterback Kyle Orton made all the right throws to move his offense.

The Bears have the entire equipment to do all those stuffs, except for one; they don´t have a
quarterback that can be trusted. Chicago announced early in the weekend they couldn’t stand
Caleb Henie anymore (actually it was me who said that), so, they would put Josh McCown
behind center. McCown has thrown two passes in two years; one of them was intercepted;
great…
“We don’t have quitters on our football team, and we have football left, a lot of football left
to go hopefully,” coach Lovie Smith told the Bears’ official website. “You want to play better,
so that’s what motivates us”.

Just in case you need a betting trend to make you pick, consider Chicago is 1-7 ATS off a
straight up loss by 14+ as home favorite.