Well, it’s time to see if Tim Tebow will stay as a kid or will become a man as his Denver Broncos host the best defense in the NFL, and the rest of the Pittsburgh Steelers this Sunday at Sports Authority Field at Mile High, in the first playoffs game for the second year quarterback.

The Steelers are favorites by 9 points, and the game total is 33.5. 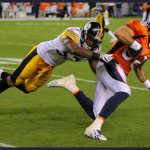 The Broncos barely made it to the playoffs; they entered with a shameful 8-8 record, and after losing three games in a row. Denver looked horrible in the last against the Chiefs as Tebow threw for 60 yards, no touchdowns and one interception. “I think that he’s probably going through what a lot of newly starting quarterbacks go through in that you get enough looks on people on film, then you get ideas about comfort zone and things about how you can potentially play him,” Steelers coach Mike Tomlin said. “I
think people are gathering more information about him.”

Denver is a horrible offensive team, but with an above average team on defense.

The Steelers, on the other side, have the best defense in the league, which automatically let us assume they will crush Tebow. However, their offense is full of injures as the quarterback Ben Roethlisberger suffers from a high ankle sprain, and their running back Rashard Mendenhall is
out with a torn ACL.

The Pittsburgh defense is more than enough to beat the Broncos without the help of Bin Ben, but it’s better if you don’t bet the side here.

My NFL Pick: Take the Under.