The 2010 Super Bowl runners-up have changed very little for 2011 but seem to get little or no love from oddsmakers heading into 2011.

Their 10 to 1 Super Bowl winning odds may have as much to do with the terrible press they received during the lockout than the personnel on the field.

They have been quiet in free agency but have been slowly re-signing their core players and piecing back together the team that was 12 – 4 in 2010 and made the Super Bowl very interesting despite a myriad of injuries to core players. 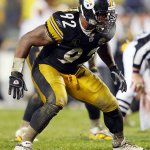 They’ve been so good for so long that we quickly forget that Troy Polamalu is only 30, Lamar Woodley is only 26, Ben Roethlisberger is 29 and Rashard Mendenhall is 24. This team still has plenty of legs on either side of the ball and most of this team has been to two Super Bowls and is only two years out of winning one.

The division is generally a toss up between them and Baltimore, but with the bottom feeders of Cleveland and Cincinnati putting together the bottom half of their division, anything less than a playoff berth is a massive disappointment.

Look for Pittsburgh to remain serious contenders in 2011, and be prepared to jump on that +1000 line as Pittsburgh rolls early in the regular season. Pittsburgh can never be referred to as being “under the radar” but this is as close as it’s going to get for them. Especially with the more public teams making major off-season moves stealing the limelight, this is a great opportunity to find top sportsbook value in a Super Bowl runner-up.

Pittsburgh backers need to take a hard look at this pre season line.