I certainly had a better feel for the 2018 season after Week 1, but it wasn’t quite enough in Week 2, as my Locks of the Week once again went 1-2.

Behind the 8-ball but not discouraged, here are my predictions for the Week 3 slate, with the Locks at the tail end, where they evidently belong.

The Browns have covered two straight against ferocious offenses (Pittsburgh and New Orleans), holding them to just 42 points, combined. Their defense is legit (8th in DVOA through two games) and should feast on rookie Sam Darnold, who was brought back to earth in Week 2 by a mediocre Miami defense. Darnold (25/41, 334 yards, 1 TD, 2 INT) piled up a lot of his yardage after the Jets were down 20-3 (ultimately losing 20-12) and will be forced into further miscues by Myles Garrett and company.

The Browns would be 2-0 straight up if not for a horrendous kicking game. Replacing Zane Gonzalez with Greg Joseph should alleviate some of those issues. It can’t really make it worse. The 24-year-old beat out veterans Blair Walsh and Cairo Santos on Monday. 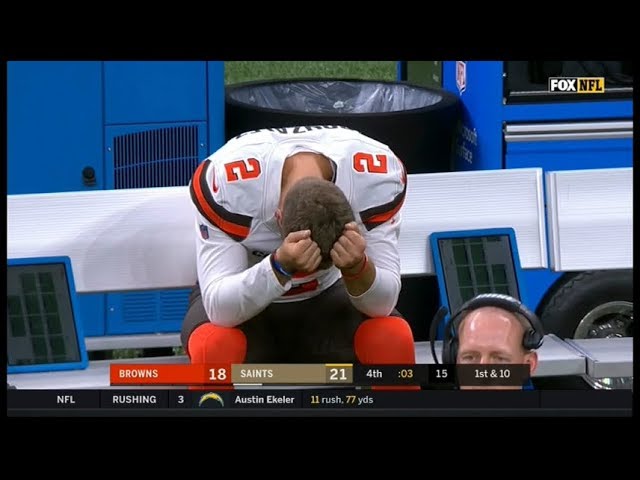 There’s no nice way to put this: the Bills are awful. They are deadlast in DVOA, deadlast in offensive DVOA, and 28th in defensive DVOA. They are retire-at-halftime bad. But 17 points is just too many to lay in an NFL game that doesn’t feature the Greatest Show on Turf, or some similar offense.

While Kirk Cousins has the Viking attack operating efficiently and has made a couple spectacular throws already (see video above), this isn’t a blow-you-out-of-the-water unit, and Mike Zimmer will put it in cruise control once Minnesota builds an early lead. The veteran coach knows better than to let any of his key pieces get injured during a game that’s in hand.

It’s hard to make heads or tails of this Washington team through two weeks. After steamrolling a bad Cardinals squad on the road (24-6) they were held to just 9 points at home by a suspect Indianapolis defense (21-9). Perhaps the most concerning part is that the supposedly strong pass rush only generated one sack against a flimsy and undermanned Colts offensive line.

The Packers haven’t been world-beaters, either, needing an epic fourth-quarter comeback to beat Chicago in Week 1 (24-23) and blowing a 23-14 fourth-quarter lead to Minnesota last Sunday in a game that ended in a tie (29-29). Aaron Rodgers has been solid on one leg (111.3 passer rating), but he’s getting little support from his ground game (83.5 YPG).

Still, in a battle between two teams still trying to find consistency, I’ll side with the league’s best QB laying a field goal.

Why are the 2-0 Broncos getting more than a field goal against a Baltimore team that just lost by double-digits to the Bengals (34-23)? Because there are early indications that, when we look back on the 2018 season, Denver’s narrow home wins over Seattle (27-24) and Oakland (20-19) will be seen as two of the least impressive wins by any team all year. Case Keenum and the offense were held in check by a Khalil Mack-less Raider defense for an entire half before scoring on four straight drives in the final 30 minutes.

Meanwhile, the last time we saw Baltimore at home, they were embarrassing the Bills, 47-3. Yes, the Bills are a joke of a team right now, but stomping on bad teams is what good teams do. Falling behind the Bengals 28-7 is definitely not what good teams do, of course, and Cincinnati was able to victimize the Baltimore offensive line last Sunday, sacking Joe Flacco four times and picking off another pressured throw. The strength of the Denver defense is in the Von Miller-led pass rush, and I can see a few timely takedowns turning the tide in a tight game.

In case you haven’t heard, Carson Wentz is back! That has the Eagles, who were 6-0 at home before Wentz was injured last season, laying nearly a touchdown to the Colts, even though Andrew Luck looked a lot like his old self in Week 2 (a 21-9 win in Washington).

Which side you take here depends entirely on how you expect Wentz to play in his first game since Dec. 10, 2017. If you think he’ll be close to the MVP favorite we saw last year, laying a TD at home with the Super Bowl champs is the play. (Don’t forget how good this Philly defense is at The Linc.) If you think he’s going to be considerably less than that, the road ‘dog and the points would be better value.

If Wentz were facing a better defense — one that could pressure a rusty mind into mistakes — I’d be tempted to fade the Eagles here. But Indy’s defense has little to no pass rush and susceptible corners, even if it didn’t show against Washington in Week 2.

Eventually this KC offense is going to slow down. Rookie QBs don’t average five TDs per game for an entire year. But Patrick Mahomes should continue to find success in his first home game against a 49er defense that just gave up 27 points and 343 yards to Matt Stafford and the Lions.

I’m also confident that the KC defense will continue to do its part when it comes to hitting OVERs. They are surrendering over 500 yards per game through two weeks. Kyle Shanahan and Jimmy Garoppolo will be able to score some points, even in the tough Arrowhead environment. This is the highest game total of the week, but I’m riding Kansas City OVERs until they let me down.

Both of these offenses have been massive disappointments so far. Neither has topped 20 points so far. The Giants needed a last-minute, garbage-time TD just to hit double digits in Week 2 (a 20-13 loss at Dallas). Deshaun Watson is averaging just 223.5 passing YPG through two weeks and looks like a shadow of the phenom we saw last season.

The hope for New York here is that the Texans defense might be the worst they’ve faced so far. Houston doesn’t have a bad defense, but Dallas and Jacksonville may prove to be two of the top Ds in the league. (Yes, Dallas finally has a defense.) In what should be an extremely low-scoring game, six points is a huge margin. Take the road ‘dog.

In Week 1, the New Orleans defense laid an egg, giving up 48 points to Tampa Bay. In Week 2, the offense couldn’t get anything going against the Browns, scoring just 21 points in an extremely lucky 21-18 win. But remember how slowly this team has started in recent years. They were 0-2 last year before turning it on and finishing 11-5.

The Falcons’ offense has also shown a high degree of variability, scoring just 12 points in Week 1` (18-12 loss at Philadelphia) but then lighting up Carolina for 31 (31-24).

These teams played a pair of low-scoring games last year (averaging just 36.5 PPG, combined), but that followed a pair of shootouts in 2016 which average 73.5 PPG. Given how banged up the Atlanta defense is and how vulnerable the New Orleans defense has looked so far, this one should go OVER.

Is this 2-0 Cincinnati team legit? Among the 2-0 teams, their competition has arguably been the toughest (Indianapolis & Baltimore) and they showed their mettle on the road in Week 1, coming back from a double-digit deficit. But they are down workhorse running back Joe Mixon and facing a Carolina defense that held Dallas to a little over 200 yards of total offense at home in their opener.

The determining factor in this game will be whether Cincinnati’s offensive line can keep Andy Dalton clean in the pocket. The Red Rifle has routinely shown that, when he’s not under pressure, he can make full use of the serious playmakers around him, in particular AJ Green, who racked up three TD catches in Week 2. But when Dalton is pressured, mistakes and turnovers abound.

The Cincy o-line has given up just two sacks in two games, while the Carolina pass rush was shutout against Atlanta after piling up six against Dallas. I think there’s a strong possibility of a push here, so I’ll go with the UNDER in a game between two solid defenses and two banged-up offenses.

This line will be posted once the status of Marcus Mariota becomes more clear.

Jared Goff and the Rams, who have a league-best +54 point differential keep it rolling against a Charger defense laboring without Joey Bosa.

Are you ready to pack it in on the 2018 Seahawks? I am. As I said above, the Dallas defense is legit (14.5 PPG after Week 2) and Seattle is struggling to move the ball without Doug Baldwin, who’s likely to miss another week. The Seahawks are giving up 116 yards per game on the ground and Zeke Elliott will have enough success to lead the Boys to a road win in the once impenetrable CEnturyLink Field.

With Khalil Mack and Roquan Smith hounding opposing QBs, this Bears team is for real, at least on defense. On offense, Matt Nagy has proved that he can script early drives extremely effectively. (Chicago’s first-half spreads are definitely something worth looking into.) Chicago should once again jump out to a lead here, and Arizona doesn’t have the horses to come back. Sam Bradford is a check-down QB not built for overcoming deficits, and even if he were, he doesn’t have the down-field weapons to do so.

On the ground, the Arizona offensive line has been a joke. As great as David Johnson is, Arizona is second-last in the league in rushing (61.0 YPG). Until this Cardinal team shows signs of life, fade them hard, even at home, even with Chicago on a short week.

Matt Stafford was much better in Week 2 than Week 1, leading the Lions to 27 points on the road in San Francisco. But it wasn’t enough to get the win (30-27) and the team lost top CB Darius Slay to a concussion.

The situation for the 0-2 Lions is about to get worse as a pissed-off Patriots team comes to town after a 31-20 loss to Jacksonville. Detroit’s defense hasn’t been able to stop anyone yet, not even rookie Sam Darnold, and I see a strong bounce-back game for Brady and the Pats, now with Josh Gordon in the mix at receiver.

Easiest pick of the week. FitzMagic will continue for at least one more week against a porous Pittsburgh defense, while the Steelers offense does plenty of damage against Tampa’s own suspect D. Take the OVER all day every day, and twice on Monday.