San Francisco looks like the best team in the NFL because they know exactly what they are; the 49ers will try to show it again against the Minnesota Vikings this Sunday at 1 PM ET at Mall of America Field. 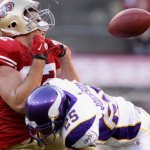 San Fran’s defense managed Aaron Rodgers and Mathew Stafford (two of the best NFL passers) on consecutive weeks without many problems, and there shouldn’t be a problem against Christian Pounder this week.

“Playing on this team right now is really exciting,” Aldon Smith said. “Being fortunate enough to play on this defense is even more exciting, playing with all the playmakers”.

But in Minnesota they are not only afraid about the Niners defense; they know their offense is rolling, also.

“The way Alex is playing, he’s so efficient with the football, he knows exactly where to go,” Minnesota coach Leslie Frazier told the team’s website. “He has the capability as well so that creates a lot of problems for any defense that lines up to play them. We’ll have our hands full defending the run game and not giving up big plays in the passing game”.

The Vikings need to establish the run as a priority and then let go Pounder, especially trying to find Percy Harvin; the team’s bets playmaker on the receiving corp.

“We’ve got to do better,” Frazier said. “The way our team is built, we’re going to play a lot of close games”.

San Francisco is seven point favorites over the Vikings in the NFL Odds.