With Tim Tebow out and Peyton Manning in, the AFC West division becomes one of the most intriguing and exciting divisions in the NFL as three of the four squads have been in the playoffs in the last three seasons. 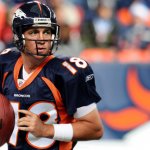 Denver Broncos +150: With Manning in town the whole goals of the franchise will chance, not only are the Broncos favorites to win the division, but if they get to the playoffs, Manning will raise Denver’s odds despite he has only one Super Bowl ring.

The problem for Manning is that he doesn’t have great receivers on this team, but as we all know; he does everybody better.

San Diego Chargers +165: with all the Manning talk I’m pretty sure Phillip Rivers will have something to say about it.  San Diego has missed the last two postseasons and they need to avoid starting slow like they always do.

Likewise, Ryan Mathews needs to show he is the back the Chargers need; since LaDanain Tomlison left San Diego seems to be a passing team that gets hurt whenever they try to run the ball.  That needs to change.

Kansas City Chiefs +325: The Chiefs now with Romeo Crennel in charge will try to build from the win over the Packers last season.  When Kansas City gave Green Bay their first loss of the season, Crennel showed his boys that discipline and mistake free football can take you far.

Oakland Raiders +450: The Raiders will have Carson Palmer on his second year behind the offense, and despite it can only means good things, he is one year older amd we don’t how many gas he has left in the tank.

The Raiders lost Michael Bush to the Bears, and OLB Kamerion Wimbley the Titans; plus they didn’t pick anything fancy in the draft (their first draft choice was the 95th overall).  Their most famous pick up in the offseason was backup quarterback QB Matt Leinart; that should say it all.