The Houston Texans think they are for real; most people don’t.  They will have three chances to prove it over the next three weeks, starting with their visit to Baltimore this Sunday to face the Super Bowl champions Ravens.  The game is at 1 PM ET at the M&T Bank Stadium. 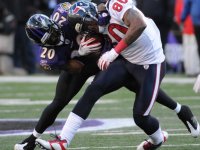 The next three games for the Texans are: at Baltimore, then Seattle at home, and a trip to San Francisco. If they want to be considered contenders, they need to win at least two of those.

Houston had a lot of trouble against the Titans at home; they completed just 6 of 17 third downs conversions and had to use overtime to beat the AFC south rivals 30-24.

“That’s part of the NFL battle. We’ve got to get more consistent at what we’re doing,” said coach Gary Kubiak. “We just didn’t make any third downs. Third downs, they’re the key to staying on the field and being balanced.”

The Texans don’t know if wideout Andrew Johnson can play on Sunday after a late hit against Tennessee.  “It’ll be an end-of-the-week decision because we have to go through the process,” Kubiak said. “I think after the game, talking to him and seeing where he’s at today, he’s doing really well, and I’d expect the progress to go very quickly.”

The Ravens beat the Browns 14-6 in week 2 but didn’t look impressive.  Running back Ray Rice left the game with a strained left hip flexor, he’s doubtful for Sunday.

Baltimore is 6-1 SU in its last 7 games when playing Houston, and 19-2 SU in its last 21 games at home.  For Sunday, the Texans are 2.5 favorites despite playing away from home.