It’s been an awful offseason for the Patriots; they lost Wes Welker to the Broncos, Rob Gronkowski can’t get any more surgeries, and now Aaron Hernandez was arrested this Wednesday which led to the team dropping him out of the roster. 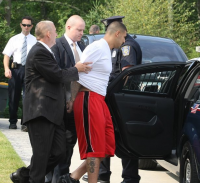 Vegas has New England as the top team in the AFC East with the total wins for the 2013 season set at 11, but that was before Hernandez news.  A tight end shouldn’t affect the odds by any means, but considering Tom Brady won’t have any his 2012 top four receivers this year, things could get ugly.

As I mention, no Welker, Gronk will be out of the first few games, no Hernandez, and they’ve cut Brandon Lloyd earlier in the offseason.

Of course having Tom Brady helps; this guy can throw to a rock, and the rock will catch it, but there is a certain feeling that this offseason is unpatriots like.

“A young man was murdered last week, and we extend our sympathies to the family and friends who mourn his loss,” the Patriots’ statement said. “Words cannot express the disappointment we feel knowing that one of our players was arrested as a result of this investigation. We realize that law enforcement investigations into this matter are ongoing. We support their efforts and respect the process. At this time, we believe this transaction is simply the right thing to do”, explained the statement by the Patriots after Hernandez arrest.

The Patriots are -550 favorites to win the AFC East division despite the difficult offseason. However, this is the first time since 2003 where the Patriots are not one of TOP TWO favorites entering season.   NFL Odds to win it all: 49ers 6/1; Den 6/1; Sea 8/1; NE 8/1.