Cowboys and Eagles fight for the top of the NFC East division as they meet this Sunday at Lincoln Financial Field, in what should be a shootout in the NFL week 7. 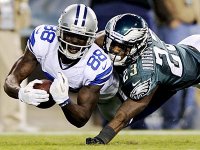 Both franchises are 3-3 and have looked a lot better than expected over the last two weeks.  The NFL odds have the Eagles as 3 point favorites, and the game total is 55 points.

Philadelphia will go with Nick Foles as their starting QB for the second game in a row.  He has thrown 542 yards, 6 TDs and 0 interceptions over the last game and a half (played half a game against the Giants two weeks ago).

“I feel really comfortable here. I feel comfortable with our personnel, our plays, everything,” Foles said. “It helps when you have a great relationship with the players, the coaches, and when you go into the game you’re all on the same page. … Everybody stuck together, and it was another team win.”

The Cowboys beat the Redskins 31-16 last week and will have to overcome some injuries to face the Eagles.  RB DeMarco Murray is questionable, and LB DeMarcus Ware is a game time decision.

“We have to be able to run the football well when DeMarco Murray is not our runner,” Cowboys coach Jason Garrett said.

Both teams have top 5 scoring offenses entering this week, but I’d stick with the under.