The San Francisco 49ers look to get to the NFC championship game for the third time in three years as they visit the Carolina Panthers, this Sunday at 1:05 PM ET at the Bank of America Stadium. 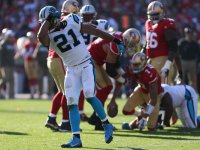 The Niners beat the Packers last week with a great performance by Colin Kaepernick; he needs to do the same against the Panthers, but it won’t be easy considering Carolina’s defense had 60 sacks in the regular season, best number in the NFL.

“Our defensive ends can’t get too far past the quarterback, or he takes off and it gives him huge lanes,” said Panthers defensive tackle Dwan Edwards. “It’s important that everyone stays in their lanes, and when someone does get out of their lane we have to cover that up quickly.”

On the other hand, Cam Newton, will try to win on his postseason debut.

“We’ve seen the guy that’s grown in the last three seasons,” Panthers head coach Ron Rivera said. “He’s developed of lot of who he is in terms of our offense, and his learned a lot of things to help him deal with the media.”

The 49ers are favorites by 1 point despite they are not the top seed, or the home team.  The game total is set at 41 points.