The two highest draft picks in 2012, Andrew Luck and Robert Griffin III will clash for the first time this Saturday at 4 PM ET, when the Redskins and the Colts meet for preseason week 3 at Fedex Field. 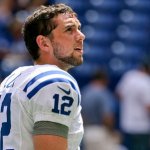 Both Luck and RGIII have impressed both, but what Andrew showed against the Steelers on a Sunday night was more than spectacular despite throwing two interceptions. He forgot about those mistakes and played like a mature quarterback.

“You never want to throw any interceptions, even if they are tipped, bobbled, whatever,” Luck said. “I’ve got to cut down on those, but I think showing we can bounce back from those mistakes and kind of climb out of that hole was a good sign.”

The Redskins, on the other hand, lost to the Bears, and RGIII didn’t see the field all that much against Chicago. Expect him to be in there against the Colts, plenty of time.

“As far as my play went, we really never got into a rhythm, but I think everybody wanted to go back in the second half,” Griffin said. “We didn’t play bad, but we didn’t play good, either.”

The lines have Washington -3.5 against Indianapolis, but I like the Colts in this one because of what Luck have shown on every snap.