Super Bowl 46 will gives us a rematch of one of the most improbable upsets in sports history as the New
England Patriots will seek for revenge against the team that ruined their perfect season in 2007, the NY
Giants. 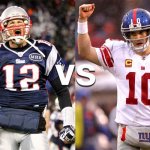 The Patriots didn’t play their best game in the victory 23-20, but they managed to advance to their fifth Super Bowl in the Bill Belichick- Tom Brady era. “Well, I sucked pretty badly today, but our defense saved us,” Brady said. “And I’m going to try to go out and do a better job in a couple weeks.”

The victory was the 16th for Brady in the playoffs, tying his idol Joe Montana after kicker Billy Cundiff missed a 32 field goal to tie the game. Brady will play his fifth Super Bowl; he has won three of the four Super Bowl games played, only losing to Eli Manning and the NY Giants in 2007.
“I still can’t watch highlights from that game,” Brady said Monday on Boston Sports radio station WEEI
of the Week 9 game. “I think that’s just the way it is. You get to the end, and we had a great opportunity
there, and really squandered it because we didn’t play our very best.”

The Giants will be the rivals of the Pats. New York took advantage of the overtime fumble by Kyle
Williams in the victory 17-14 over San Francisco. Eli Manning had a big game, despite getting a true
beating by the 49ers defense.”That was a tough game. We had to fight for every yard that we got,” Giants quarterback Eli Manningsaid. “Defense was outstanding, special teams getting us two turnovers were huge. That led to 10
points”.

Eli Manning will look for his second Super Bowl ring, and Tom Brady his fourth. Both will play in Indianapolis, Eli’s older brother Peyton Manning’s backyard.