Scott Dixon is the favorite to win the 105th Running of the Indianapolis 500 after finishing first at the Genesys 300 for the second-consecutive year. The New Zealander’s victory at Texas Motor Speedway moved him atop the NTT IndyCar Series championship standings, and he also won at Indianapolis Motor Speedway back in 2008.

Will the six-time series champion capture his second Indianapolis 500 on Sunday, May 30 or will one of the other 33 drivers be treated to a cold bottle of milk? Let’s look at the latest odds. You can also find auto racing wagering tips for NASCAR betting and  Formula 1 betting.

Scott Dixon opens as the favorite

After winning four races in 2020, Team Penske driver Josef Newgarden (+700) is just behind Dixon (+500) on the board. However, it was his teammate Scott McLaughlin (+2000) who placed second behind his fellow New Zealander at the Genesys 300 a couple weekends back. An impressive feat considering McLaughlin was a rookie racing on his first oval track.

Alexander Rossi (+900) won the Indianapolis 500 as a rookie in 2016 and scored four podium finishes in the final five races of 2020, but has had an unremarkable start to the season. His Andretti Autosport teammate Colton Herta (+1400) dominated April’s Firestone Grand Prix of St. Petersburg, tying his dad Bryan for career IndyCar victories.

Reigning series champion Scott Dixon led 206 of the 212 laps on the 1.44 mile oval at Texas Motor Speedway in a record-breaking drive. https://t.co/107goCAZGx

Just four days before his 22nd birthday, Pato O’Ward (+900) captured his first IndyCar win at the second race of the Texas double-header. At the start of the season, the McLaren team told the Mexican-born driver that he could test the F1 car at the end of the year if he won an IndyCar race – but nothing is stopping him from winning another.

Just a point ahead of O’Ward in the season standings, Will Power (+900) will also be in contention to win another Indy 500 after capturing the checkered flag at the 2018 event.

Takuma Sato (+1400) has long odds considering he’s a two-time and defending champion. Sitting eighth in the standings, Simon Pagenaud (+1000) is also a recent victor at Indianapolis Motor Speedway, winning in 2019.

Alex Palou (+1800) won the first race of the year at Barber Motorsports Park, notching his first career victory in his second season, and placed fourth at the season’s opening oval race at Texas Motor Speedway after starting on the pole position. This is the Spaniard’s first year behind the wheel with Chip Ganassi Racing, and considering he’s available at much longer odds than his teammate Dixon, he makes an excellent arbitrage play at the Indy 500. 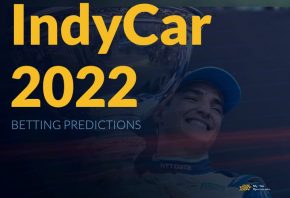