The Yankees have been outstanding in June, but the Atlanta Braves ended a 10 games winning streak on Tuesday, beating them twice in a row. “They pitched really well and had some really good defense. That’s kind of what we’ve been doing,” Yankees manager Joe Girardi said.

“None of the breaks kind of went our way tonight,” Teixeira said.

Girardi and their offensive stars lead the majors in HRs and are on a pace to challenge the all-time single-season record of 264 set by the Mariners in 1997.

The Mets, on the other hand, already know what is losing against their older brother this season as they were swept in the Bronx just two weeks ago.

“Our ballpark plays a little bit differently than theirs,” Mets manager Terry Collins said. “Yankee Stadium is a great place for their team and their fans; there’s a lot of home runs hit. They can hit them out of here, too; it’s just not quite as easy as it is over there.”

What the Yankees have done this year is as impressive as unusual. They are just .218 with runners in scoring position (27th in the majors), but they own an impressive 29-5 record in multi home run games.

Take the Bombers with Nova on the mountain. 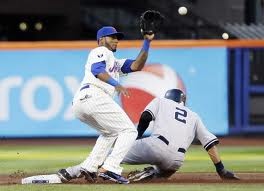