With the MLB season almost upon us, it’s time to catch up with what each team has been up to this offseason and determine which ones will surpass their o/u win totals. We’ve covered the NL East and the NL Central. Now we finish off the National League with a trip to the NL West.

The National League playoff crop this season could be one of the most interesting in recent memory. That’s why it’s really too bad that the result of this season has already been determined. I know baseball writers across the country will try to build up suspense with “power rankings” and “analysis” over the course of the season, but a simple cursory glance at the calendar will tell you who this year’s World Series champ will be.

Since 2016 is an even-numbered year, we can officially crown the San Francisco Giants champions of the MLB!

Sticking to one of the weirdest title-winning strategies in sports, the Giants have spent the last four odd-numbered years missing the postseason entirely, then recovering to win a World Series (2010, 2012, 2014). While inconsistency is normally deemed a bad thing in sports, I think that’s a situation Giants fans can get behind.

It’s certainly favorable to the consistency the Los Angeles Dodgers have displayed: winning three straight division titles and a ton of Cy Young awards but never making any noise in the playoffs. Or what about the Colorado Rockies? A team that consistently struggles to hit .500 while their pitching staff gets shelled for the worst ERA in the NL. Perhaps consistency is overrated?

Unless you’re looking for betting tips, that is, then I’m guessing you wouldn’t mind a little Metamucil-like regularity.

So I’ll do my best to consistently nail each NL West team’s o/u wins for 2016! 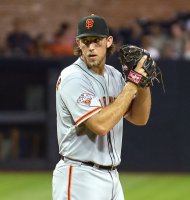 It makes sense that the Giants would start their championship-season-to-be by signing starting pitchers Johnny Cueto and Jeff Samardzija. An 84-win team last season, the Giants dealt with a ton of turmoil in their starting rotation, like missing Jake Peavy and Matt Cain for almost half the season. But just because San Fran has a quintet of formidable names in its rotation, it doesn’t mean that rotation will be top of the line.

Cueto got kicked around for the half a season he spent in the AL; for Samardzija, it was a year and a half. Will both see a noticeable improvement when they return to NL ball this season? What about Cain, whose ERA has steadily risen over the last three seasons? Or Peavy, now entering his 15th year? Madison Bumgarner looks like the only certainty in this rotation, and that could spell trouble in a division loaded with pitching talent.

Offensively, the Giants look set, especially after adding Denard Span to their outfield. Thanks to perennial MVP candidate Buster Posey and breakout second baseman Joe Panik, no team in the NL was better at getting on base last year than San Francisco. And even though AT&T Park is the worst home run stadium in baseball, the Giants still managed to rank fourth in the NL in slugging percentage.

Strong offense and decent pitching should win you a lot of games; but given how tight I think the West will be this year (as you’ll see below), the better value seems to be taking the UNDER. 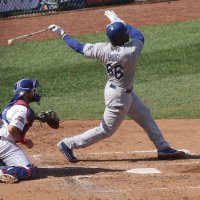 If the Dodgers couldn’t get it done in the playoffs last season, it might never be in the cards for this group. After all, they had two Cy Young runner-ups last season (Clayton Kershaw and Zack Greinke) and still lost a pitchers’ duel in the NLDS. Now Greinke is gone and the hurt is that much deeper since he opted to stay within the division and sign with Arizona.

Scott Kazmir now enters the fray as Greinke’s replacement. He’ll have massive stockings to fill, succeeding a pitcher who had just a 1.66 ERA last season. And even if Kazmir can put up outstanding numbers, there’s one aspect of Greinke’s he can’t replace: the fact that he was right-handed.

In one of the stranger stories of the year, the Dodgers could potentially be an all-southpaw rotation when Hyun-Jin Ryu returns from injury. Kershaw, Kazmir, Brett Anderson, and Alex Wood are all lefties, and the first three are locked in as starters. To avoid trotting out a lefty every day, L.A. will probably give the fourth spot to Mike Bolsinger or MLB-newcomer Kenta Maeda, even if it is undeserved.

Offensively, the Dodgers were a perfectly average bunch last season. This year probably has something similar in store; Adrian Gonzalez, Carl Crawford, and Andre Ethier aren’t about to start hitting like it’s 2009. If anyone is going to power this offense to the level of their division rivals, it will have to be the young guns.

Yasiel Puig was one of baseball’s most exciting young stars, but injuries completely derailed last season and now he needs a big bounce-back campaign.

In his rookie season, outfielder Joc Pederson proved he could go long in the MLB, but that was about it as he compiled just a .210 average. He’ll need to improve his contact if he’s going to be an everyday starter.

The kid with the biggest expectations might be rookie shortstop Corey Seager, who had a big September last season and has been handed the starter’s spot. Can the 21-year-old help the Dodgers three-peat as division champs?

I say yes. Take the OVER. 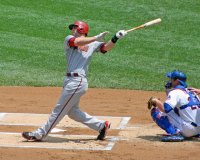 In order to lure Greinke to the desert, Arizona gave him the highest average salary of any MLB player, with a six-year, $206.5 million deal. While it is far too early to tell if that contract will bite them in the ass, it is understandable why the Diamondbacks had to take a swing. With Paul Goldschmidt and A.J. Pollock leading the offense, the D-Backs scored the second-most runs in the NL, but they need top-of-the-line pitching to make them a true contender.

Greinke led all pitchers last season with a 9.3 WAR, while Arizona basically trotted out a replacement level starter every night. The D-Backs had a team ERA of 4.04 and only Rubby De La Rosa made over 30 starts. As if adding Greinke won’t already help that issue, the team also traded for Atlanta’s Shelby Miller, giving them a legitimate one-two tandem.

However, Arizona’s desperation for pitching came at a huge cost. Not only did they ship outfielder and .300-hitter Ender Inciarte back to Atlanta, but they also gave up two of their best prospects, including 2015’s no. 1 overall pick, shortstop Dansby Swanson.

It’s clear the Diamondbacks want to win now: their fans might riot if they don’t. And while the team below proved that taking big offseason swings doesn’t always pay off, I think Arizona’s moves will thrust them back into the fold. The NL West is a three-way race this year.

Take the OVER on Arizona.

The Padres really tried to get over the hump last season, overhauling the team in the winter. It was an admirable effort by GM A.J. Preller. But, ultimately, his prize for said effort was 74 wins and the right to pay Matt Kemp and James Shields ridiculous amounts for the next four seasons.

With all the hype around San Diego gone, there’s nothing to get excited about on this team. The offense is a lineup of capable major league starters, but doesn’t feature anyone worth pitching around. The rotation is the very definition of “meh.” If anything, the Padres look right on track to repeat 74 wins.

My suggestion for betting this team, if you must, is to expect less from them, and hope Preller can find a way to sell off some of his better assets at the trade deadline.

This year, if you’re looking to take a young child to a baseball game, but are worried they might find it “too boring,” might I offer a solution? Take them to a Colorado Rockies game. Last year, the Rockies approach was simple: score a boatload of runs, but no matter what, allow the other team to score more. Colorado led the NL with a whopping 737 runs scored, and still finished with a ridiculous -107 run differential.

Colorado had some exciting batters for the watching, too: Carlos Gonzalez, Nolan Arenado, DJ LeMahieu. Of course, the Rockies run-smashing was largely a product of their ballpark. (High-scoring games literally come with the territory in the thin air of Denver.) When Colorado hit the road last season, they were the NL’s least effective offense.

No matter where the Rockies pitched last season, they were hot garbage. Jorge De La Rosa, the team’s resident “ace,” had just a 9-7 record and boasted a 4.17 ERA. That’s not exactly akin to trotting Randy Johnson out there. At least he was backed up by the worst bullpen in major league baseball!

Until Colorado finds a real major league pitching staff, losing seems like their only option.