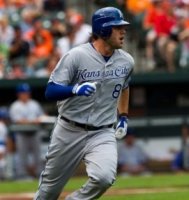 For the Pirates, the All-Star Break could not have come at a worse time. The team was on fire prior to the hiatus, winning six of seven and sweeping the MLB-leading Cardinals. In their first series after the break, however, they were swept by the lowly Brewers and again trail St. Louis by 4.5 games in the NL Central.

“The season has a long way to go,” said Pirates manager Clint Hurdle after the sweep. “We’ll look forward to starting the series there [in Kansas City].”

Sending Burnett to the mound tonight should give the team some confidence they can break their current slide; AJ is 3-1 in his last six starts against the Royals with a sparkling 1.83 ERA.

Kansas City will counter Burnett with Yordano Ventura, who spent nearly a month on the disabled list with an arm issue before returning to face the Rays just before the All-Star Break. Ventura went five innings and allowed four hits and three earned against Tampa en route to an 8-3 KC win.

“I’m not 100 percent,” Ventura said to the MLB’s official website after the win.

The Royals went on to take three of four from the White Sox in their first series after the break and have now won ten of their last 12 to sit atop the AL and six games ahead of the Twins in the AL Central.

In the trends, Pittsburgh has won five of the last six against Kansas City and – as mentioned – Burnett has good numbers against the AL leaders. But all six of the recent Pirates/Royals games came in Pittsburgh and this KC team is a different beast than the one Burnett has faced.  With the Royals on fire and at home (and Burnett struggling, overall, of late), the home side looks like better value at -121.