The Tampa Bay Rays own the best record for one of the American League wild card spot, and in order to keep it that way in the last week of the regular season they need to win the three game series against the Toronto Blue Jays, to be play from Friday to Sunday. 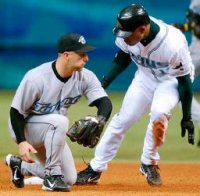 Tampa Bay swept the Orioles before taking on the Yankees this week. The Rays have started putting their best pitchers to close this deal; the total has gone UNDER in 4 of Tampa Bay’s last 5 games on the road.

Pitcher Matt Moore was outstanding in the 7-0 win over the Yankees on Tuesday night.  It was the Rays fifth win in a row.

“You cannot be more effectively wild than he was tonight,” Rays manager Joe Maddon said.

The Blue Jays, of course, are eliminated from any chance to reach the postseason. They have lost nine of the last 14 matchups.

The last time this two ball clubs met Tampa Bay won two of the three games. Keep in mind, the Rays have won 14 of the last 20 in the series against Toronto.  Also, four of the last five meeting were under the total.