The Seattle Sounders tasted defeat for the first time in this season’s MLS, after losing 1-0 away to Minnesota on Sunday.

Despite the defeat, Seattle still sits top of the Western Conference, and they are still MLS betting favorites with top sportsbooks to be this season’s Champions.

The top of the Western Conference is really getting close though. Just 5 points separate the top 3, and the two sides chasing Seattle (Kansas and LA Galaxy), both have a game in hand.

The latest round of midweek fixtures could see that gap shrink further. Below we take a look at what’s in store for the top 3.

Can Seattle get back to winning ways?

Next up for Brian Schmetzer’s team is another tricky looking away trip. Seattle travel to Austin FC on Thursday, and by the time they kick-off at the newly built Q2 Stadium, they could be level on points with Kansas City, and just 2 points clear of LA Galaxy.

Despite their top spot, Seattle hasn’t been in the greatest of forms. In their last four matches, they have only managed one win, with two draws and a defeat. Now they are hit by a series of injuries, and with three games in just over a week, the timing couldn’t be worse.

Luckily for Seattle, Austin FC aren’t in great condition themselves, as Josh Wolff’s team seems to have enough injury problems of their own.

I’m not 100% sure Seattle will win this. Both sides are beset with problems, and it looks like one of those matches well worth avoiding.

Sporting Kansas set to close the gap on Seattle

Sporting Kansas City poses the biggest threat to the league leaders. They entertain San Jose Earthquakes on Wednesday and it’s fair to say that the ‘Quakes’ haven’t been pulling up any trees this season.

The top sportsbooks have Sporting at -250 to beat San Jose, and in doing so join Seattle at the top of the table on 29 points, with both sides having played 14 matches each.

Sporting has been in good form lately, completing the double over the two LA sides.

In their last outing, they beat the Galaxy 2-0 in their backyard. Late goals from Johnny Russell and Khiry Shelton sealed the win for the visitors.

In fairness to the Galaxy, it wasn’t all one-way traffic. LA had the better of the stats, with 54% possession to Sporting’s 46%.

What the result did show though is that at this moment in time, Sporting KC is more clinical in front of goal.

In this fixture, I can’t see anything other than 3 points to Kansas. I just don’t see the Quakes laying a glove on their hosts.

Set to be another difficult night for the Galaxy

Elsewhere, things don’t look as simple for Greg Vanney’s LA Galaxy side. The Galaxy is a large-looking +290 to pull off a victory at Rio Tinto Stadium. Real Salt Lake is at -111.1, while if you feel this match could end in a stalemate, the draw is +275.

In all honesty, Salt Lake did take a bit of mauling at the weekend, despite only losing 2-1 to LAFC. The scoreline might have been close, but LAFC had 29 attempts on target, compared to Salt Lake’s 3.

At home, RSL will be looking to go for the win. They have only 4 wins to their name this season, and sit in 8th position, just outside of the play-offs. Of their 4 wins, just 2 have come at home, so they will be looking to improve on that return.

As for the Galaxy, they lost their last outing 2-1 away in Vancouver, and have lost two of their last three in total. Before that Greg Vanney’s team had back-to-back wins over San Jose and Vancouver.

It’s been a bit of an up and down season so far for the Galaxy. This is born out in the stats that show they haven’t had a drawn match all season in the MLS. They’ve so far won 8 and lost 5.

Both sides will no doubt be going for the win here, and it’s hard to predict which side the coin toss will land on. So for this match, I’m going for goals, and I expect over 2.5 goals to be a winner at -153.8.

Elsewhere in the MLS

Atalanta United will be active for the first time since sacking head Gabriel Heinze. The former Manchester United full-back had been in charge for just 13 MLS matches this season, and 17 matches in total.

Gabriel Heinze has been sacked by Atlanta United after just 17 games in charge!

Atalanta who sit 10th in the Eastern Conference travel to FC Cincinnati (11th) in a bottom-of-the-table clash, with both sides looking to get their respective seasons going.

New England Revolution still sits top of the Eastern Conference. Bruce Arena’s side travels to the bottom of the table Inter Miami, hoping to extend their 4 point lead at the top of the table.

Be sure to check out our Soccer Betting guide for the best information on MLS betting, and betting on soccer in general. In the meantime, check out these great sports betting sites. 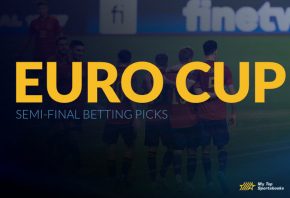